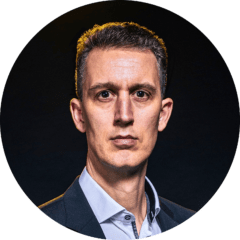 Pete Strobl started The Scoring Factory in 2009 upon settling in Pittsburgh after a successful nine year career in the European professional leagues. He was a member of the Austrian National Basketball team and played in France, Austria, Germany, Iceland, Switzerland and Ireland where he also served as Player–Coach.

Prior to his professional playing career, Coach Strobl earned both Bachelor’s and Master’s degrees as a scholarship player at Niagara University, graduating in 2000. As a by-product of working through language barriers with international players of all ages and skill levels, Coach Strobl has developed a unique ability to break down shooting mechanics, footwork and ball skills. His tactical knowledge of the game and a work ethic developed through years of fierce competition combined with excellent communication skills make him a sought after clinician, speaker and personal coach. He is also the award winning author of Backspin.

Coach Strobl is the proud father of four children with fellow The Scoring Factory team member and wife Sheryl Strobl. He spent several years as the Head Coach in the German Bundesliga of Basketball Löwen Braunschweig as well as three seasons as an assistant coach for ratiopharm ulm. To learn more, follow @PeteStrobl follow on twitter or instagram.