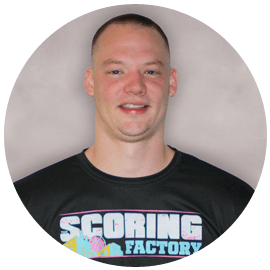 Corey Dotchin is a 2011 graduate of Gannon University where he earned a bachelor’s degree in Sport’s Marketing and Management. Gannon climbed to a #2 national ranking and reached the Elite Eight of NCAA Division II tournament while Coach Dotchin was a member of the men’s basketball team.

Upon graduation, Dotchin worked for the Erie Bayhawks of the National Basketball Development League (G-League) and was involved in scouting and player development. Coach Dotchin has served as Highlands High School assistant coach for the last 7 years, helping to lead the team deep into the state playoffs in 2018.

Coach Dotchin spent several months in Europe working for ratiopharm ulm of the German Bundesliga where he performed on court player development as well as video scouting. Coach Dotchin joined The Scoring Factory in 2016 and has used his extensive knowledge in team strategy, scouting and player development to spearhead the introduction of our Select Teams.