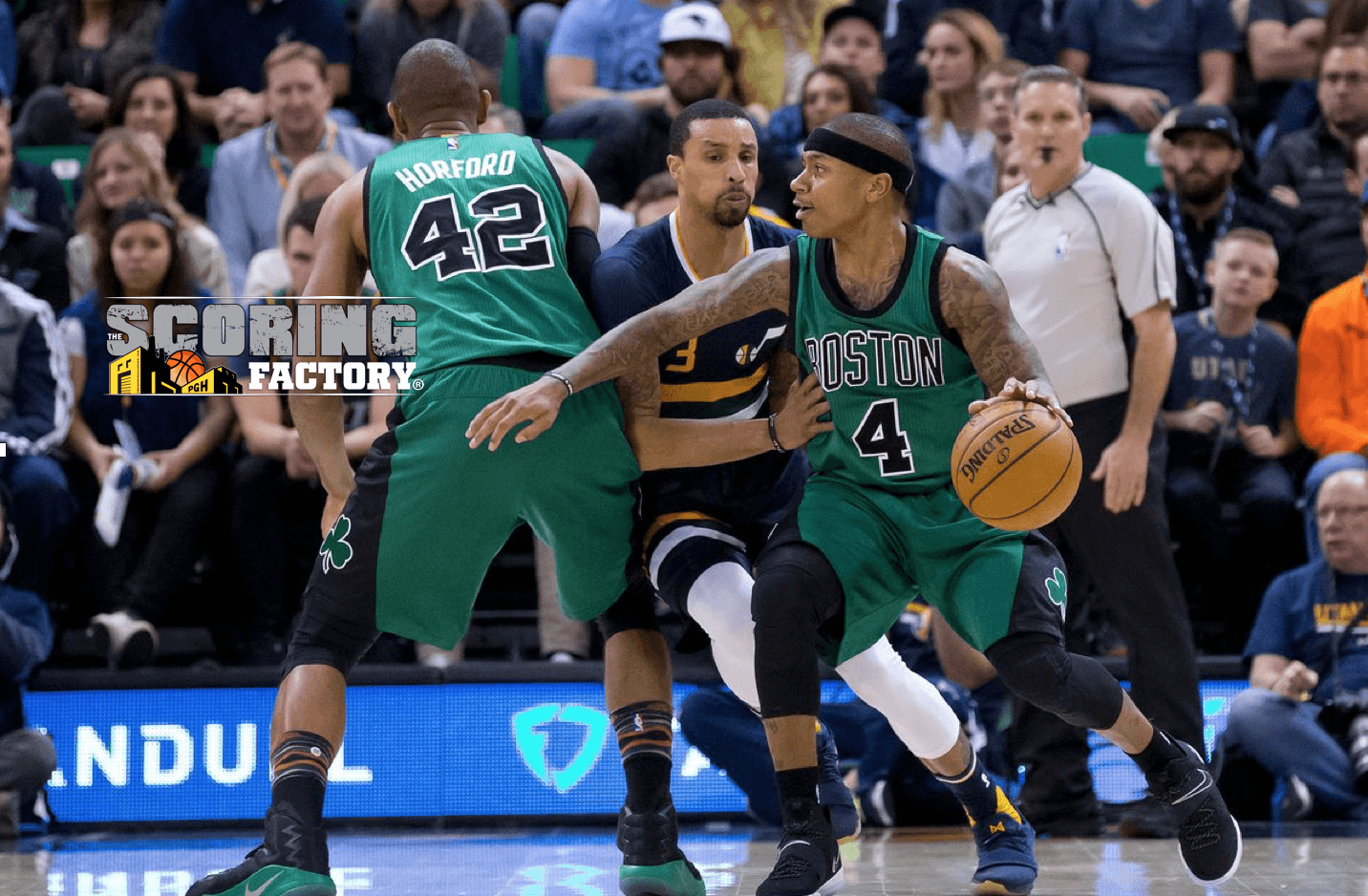 One of the most famous and consistently used plays in basketball is the pick and roll. On-ball screens are used across all levels of basketball and with a variety of different players. While there’s a million things you can talk about with a pick and roll, this article will focus on the ball handler, and most specifically the decision making skills needed to make pick and rolls dangerous. The key phrase here is decision making. As the ball handler, you have to control the pace of the play and make choices about where you go on the floor, where the ball goes, and so much more. Here are a few ways to become a dangerous pick and roll ball handler.

1. Take Advantage of the Roller

Usually your pick and roll will be run with you handling the ball and a big man setting you a screen. Even though big guys are shooting better than ever, they’ll typically be rolling off of the screen and diving to the basket. How the defense reacts to this will determine what your next move is. Here’s an example with John Wall and Marcin Gortat, and keep your eyes on the screener Gortat.

John Wall isn’t a particularly dangerous shooter, which is why his defender feels comfortable going under the screen. But the rim protector, the one who is guarding Gortat, should be coming up to contest that midrange jumper. The problem is, because Gortat is rolling to the basket, the rim protector has to stay put to prevent an easy pass and layup. John Wall sees the space and pulls up from the elbow for an easy bucket.

As you can see, a hard roll from the screener is very effective even if they don’t touch the ball. You can see that on display in this next clip too.

Watch the screener Gobert aggressively dive to the basket from the perimeter. The ball handler Rubio is cut off on the perimeter and isn’t able to penetrate, but with Gobert rolling to the basket a help defender has to slide into the paint to take away that pass. Rubio recognizes this and slings the ball to the corner, where the help has come from. His shooter is waiting there for an open corner 3, one of the best shots you can get.

While a hard roll can open up a lot for an offense, its only half of the equation. Like we said in the opening, an effective pick and roll is dependent on making good decisions with the ball in your hands. The ball handler must recognize where the defense is moving and what he wants to do from there, which leads us to our next topic.

2. Recognize the Location of the Help (And Exploit It)

In our last two clips, we can see how the ball handler is able to find the opening in a defense using the hard roll. Overall, the pick and roll requires the ball handler to either recognize how a defense is moving and exploit it, or force the defense to move in the way he wants them to move and then take advantage of that. We can see Damian Lillard taking advantage of the significant amount of attention that the defense has to give him in this next clip.

John Wall has to handle things a little bit differently in this next clip. Instead of reacting to the defense, he creates the opening himself.

Wall controls the pace on this drive. Unlike in the previous Wall clip, the elbow jumper is taken away from him. But Wall takes advantage of his defender’s position on his hip and keeps him there, while still attacking the basket and demanding a contest from the rim protector. Because he demands the attention from the big, its an easy dump off to his roller for a basket.

Notice how this was a 2 man game. Wall gets the screen way out on the perimeter, far from the basket. That means it takes longer for his roller to dive to the basket and Wall knows that, so he has to buy time for his big to cut, which is why he pauses at the free throw line and decides to keep his defender on his hip. That is how you control the pace of play. And because he decides to keep his primary defender on his hip, he’s still able to force the rim protector to try and contest his shot because the other defender is unable to do it, and by that time his roller is at the basket for an easy finish.

As we’ve seen in most of these clips, court vision is essential to making good decisions in the pick and roll. But in this next clip Jrue Holiday has to make a quick decision based on how the defense is adjusting.

The ball handler Jrue Holiday gets a step on his man after the screen. He’s penetrated and now must take in all the information around him and make a decision. What he sees is the rim protector continuing to back up and refuse to commit to the roller or to the contest. Holiday has to watch his primary defender who’s on his back, as well as the rim protector, and decide what he wants to do. Ultimately, the rim protector Looney doesn’t commit to the contest and Holiday decides he should just attack the basket, which is the right decision with KD in a tough spot to properly contest the layup.

The really tough part about this play is that this decision has to be made in a split second, and that’s after taking in all the information around you and recognizing where the two defenders are and what they are doing. This is another example of why decision making skills are critical to running a pick and roll.

A pick and roll doesn’t always have to involve a two man game or split second decision making. Sometimes all you need is a good screen to force a switch and get the matchup you want. Sometimes you can just punish a defense for not being aggressive and allowing a weaker defender to switch onto you. And that’s when you can take advantage. We all know Steph Curry is hard to guard no matter what, but watch here how he gets a very favorable matchup and recognizes it.

In the moment that a rim protector like Clint Capela switches on to a smaller, quicker guard like Curry, the offense has the advantage. Unless Capela gets some quick help, he’s in trouble on an island with one of the best ball handlers and shooters in the league.

Steph takes a Steph shot, a step-back three that only he can make look that easy, but for any dynamic perimeter player this is an ideal situation.

If you get the favorable matchup, attack it. Blow by a slower defender and get to the paint. Or if he sags off of you, pull up for an open jumper. Sometimes the best thing you can do in the pick and roll is simply isolate the mismatch and go to work.

As we have been hitting on throughout the article, good decision making is critical to running a pick and roll. And while we’ve been mostly focusing on the ball handler, sometimes the screener can make a decision too. Many times, a defense will try to anticipate what an offense is trying to do and maybe make a play or at least disrupt whatever play the offense is trying to run. But there’s an easy way to punish a defense for playing a pick and roll too early; slipping the screen. Watch Rudy Gobert score here. He’s setting the second screen, after the first is already set above the three point line.

Notice how Gobert’s defender Steven Adams is already coming out to meet the ball handler Rubio before Gobert’s screen has even made contact with the on ball defender. He’s anticipating the screen and going to where he’ll need to be if the pick and roll were to happen normally. But Gobert does a beautiful job of seeing this and, instead of staying to set the screen, slips it and dives into the paint behind Adams. Rubio’s defender has no clue that he’s supposed to have switched onto Gobert because the screen never made contact.

The defense has two defenders that could have potentially helped with either Westbrook sliding over from the right corner or Carmelo Anthony following Gobert from the free throw line. But in both of those cases, Rubio still has a potential pass he can make to an open man, either to his first screener Favors if Carmelo follows Gobert, or to his shooter in the corner Ingles if Russell Westbrook slides into the paint. All of this because Gobert took advantage of his defender’s mistake in playing the pick and roll too early.

This next clip is a simpler version of the same concept. Capela comes to screen Harden’s defender Livingston in transition. But instead of setting the screen, he slips it fast.

Capela never really sets the screen, which means that Livingston doesn’t get the chance to switch onto him and follow him into the paint. The problem is, Draymond has already come out to matchup with Harden because he’s too dangerous to allow a pull up 3 to. So when Capela slips to the basket, he has nobody around him, and with Harden being one of the best passers in the game its an easy dunk for the big man.

In this way, the screener can take in information too, and based off of that make a quick decision that can result in an easy basket. Taking advantage of a defense that is defending a play instead of a situation can be a great way to enhance your pick and roll game.

Being a dangerous ball handler or screener in a pick and roll is an incredibly useful tool to have in your skill set. It’s a great way to keep defenses on their toes and maybe exploit a mismatch or create open looks either for yourself or your teammates. And the most crucial part of any pick and roll is learning how to make good decisions quickly. A guard who can always recognize and make the right play in a pick and roll is valuable on any team at any level and can always create scoring opportunities.