Let people know you mean business with #ComeGetSome! across your chest! 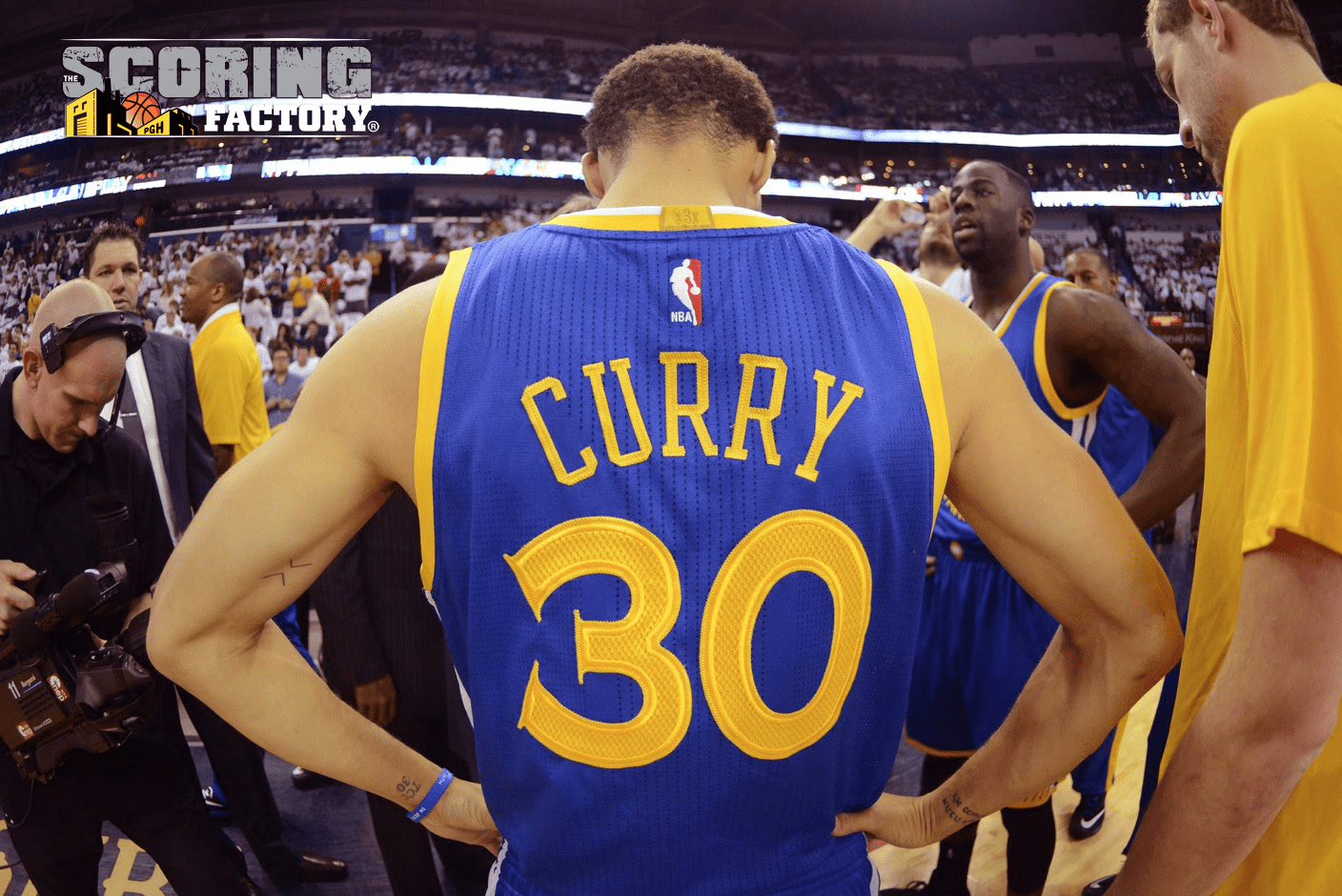 The worst thing to watch in basketball is a stagnant offense. A half-court offense where nobody moves without the ball is not only boring, it’s destined to fail. Ball movement is key to creating a dangerous offense, but to make your offense as effective as possible requires player movement as well. In this article we’ll explore how one of the best players in the game, Stephen Curry, ignites his offense and finds open looks by passing and relocating. Let’s look at four ways this skill is used to create offense

1. Exploit Sagging Off of Non-Shooters

Typically, being a non-shooter in any level of basketball provides the defense with an advantage. When you’re on the perimeter, your defender is free to leave you to help in the paint or get in the way of a passing lane. If that non-shooter catches the ball on the perimeter, they don’t typically demand a hard closeout and the defender can catch his breath for a second and relax. By learning how to pass and relocate, you can take that moment of relief and exploit it. Watch Steph and Draymond Green here:

Draymond isn’t regarded as a dangerous shooter by most people, including NBA defenses. So when Steph passes him the ball beyond the arc, Draymond’s defender naturally decides he can give the non-shooter space. But watch Steph see this and immediately relocate after his pass. He runs back to Draymond immediately and uses the hand off as a screen, and because Draymond’s defender was playing so far off of him, he isn’t able to switch effectively and leaves too much space, which Steph happily takes advantage of.

Watch again, but focus on Eric Gordon as the help defender:

Gordon is guarding Jordan Bell, also not considered a capable shooter. Gordon feels like he can help on the drive, which he does effectively, forcing Steph to pass the ball out to Bell. However, instead of taking a break from the play and waiting for the rest of his team to get open, Steph continues to run purposefully after passing, and finds his spot again in the corner, and again Gordon is too far away to help in time because he was sagging off of Bell.

Because of Curry’s constant movement after the pass, as well as him taking advantage of the space given to his non-shooting teammates, he is able to punish defenses for not playing tight on players who can’t even shoot effectively. This forces defenses into playing tight on every player, not just those who can shoot, which is something that costs them energy and can open up the rest of the floor. Using the space given to your non-shooting teammates to create space for yourself can give you a ton of options and provide you scoring opportunities.

Being able to switch onto a guard and prevent them from blowing by you is a difficult enough job for any big. But as rim protectors are forced to switch onto smaller guards more and more, they are getting better at staying in front of their man and forcing the ball out of the guard’s hands. But once again, Steph finds a way to take advantage of this after the pass:

Steph gets the big man Capela switched onto him at the perimeter. He gets by Capela but there is Ariza, waiting for him at the basket and forcing him to pass the ball out. Most big men aren’t going to chase their switch after they’ve gotten rid of the ball, and since Ariza and Capela don’t talk to each other to address who’s going to follow him, Steph gets an open shot in the corner. Steph makes this play happen by continuing to move after getting rid of the ball and recognizing this lack of communication, then getting to a spot on the floor where he can do some damage.

Watch again after Steph kicks the ball out after he drives and the rim protector meets him in the paint.

As a rim protector its natural to stay in the paint but by passing and relocating immediately and effectively, you force the rim protector to follow you, which takes a lot of effort and awareness from them.

A big part of good offense is forcing the defense into difficult situations where they have to communicate and be at their best to defend you. Putting them in positions where a lapse in communication creates an open opportunity for you is a great way to influence the game and make your offense that much better.

Another huge benefit of passing and relocating effectively is how much easier you can make it on your teammates who may not be world-class playmakers or passers. It’s unrealistic to expect every teammate to be able to make a perfect pocket pass or have the vision to find a cutter out of the corner of their eye. But if you can put yourself in easy spots to receive passes and make the decision making simplified for them, you help your entire offense and decrease the risk associated with having the ball in the hands of a non-ballhandler and non-playmaker. Watch the big that Steph kicks out to after his drive is contested.

Typically this is an awkward place for someone to catch the ball and be expected to create from. But having a man immediately cutting to the corner creates an easy decision and pass for the man with the ball (once again made possible because the rim protector doesn’t follow Steph out of the paint). The big man can do what he does best and essentially screen Steph open after passing to him. No need to put the ball on the floor or make a difficult pass.

Many times, defensive game plans are built around the idea of forcing less offensively skilled or talented players to create and make decisions. By being proactive, you can get yourself involved and make life easier for your teammates who the defense is forcing to make the decision.

Everybody is preoccupied with the player that has the ball. It only makes sense, since you have to have the ball to score. And often times for very talented players, the ball will be taken out of your hands by defenses. Double teams and traps will be thrown at you, and what you do in response to that defense can determine whether your team will win the game. To hone your passing and relocating skills means remaining dangerous without the ball in your hands and avoiding traps altogether. This is an overlooked skill, but it can be a huge liability to not relocate appropriately after passing. Look at what happens when the ball is forced out of Lillard’s hands here.

He stands still after making the pass, not moving to get open again, not attacking any open space on the court, and not making things any easier for his teammate attacking the rim, who ends up putting up a bad shot early in the shot clock. This series ended in a sweep for Portland, in part because New Orleans forced the ball out of the hands of Portland’s two best creators, Damian Lillard and CJ McCollum. Portland couldn’t find ways to involve those two and the Pelicans essentially forced Portland’s role players to beat them, which they could not. In a world where Lillard and McCollum utilize passing and relocating to find ways to get the ball in open space, maybe this series goes differently.

Not everyone is a knockdown shooter like Stephen Curry is. But by using this purposeful passing and relocation, you can find your own areas of the court to do damage in and create space for yourself. This skill requires awareness and high level effort, which is what makes it so hard for players to use and defenses to guard against. Constantly moving around for the entire duration of a possession is tiring but creates opportunities for your team and can take your offense to the next level.