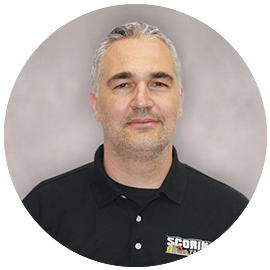 Milan Smiljanic has been at the forefront of Professional Basketball in his native Serbia as a player, a coach and finally as a Sports Director for twenty-five years. His professional career began with an eight season run with First Division Professional Basketball Club BORAC in Cacak, Serbia in 1988. His career took him to Lublin, Macedonia, Bosnia and Portugal.

Coach Smiljanic returned to Cacac, Serbia for the last four years of his playing career with BORAC where he transitioned from player to Coach, ultimately taking the reins as General Manager and Sport Director until settling in Pittsburgh in 2013.

Coach Smiljanic brings a valuable and unique perspective earned through his years with BORAC where he  managed the entire organization of the club’s basketball programs including recruiting, daily practice, public relations and player development.[/vc_column_text][/vc_column][/vc_row]